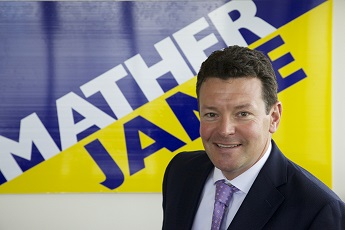 In total, Alex secured more than 70 deals in the county, while his firm - Loughborough based surveyors Mather Jamie - was named as the second Most Active Agents in Leicestershire for the same period.

“This award shows the high level of sales and lets we continue to achieve for our clients,” said Alex, who joined the business in 2002, “and it’s a great achievement to have been named Dealmaker by Estates Gazette for the second time in the last three years.

“Research done by the Estate Gazette shows that office space take-up in Leicestershire increased by a staggering 87% last year, and it’s gratifying to know that our efforts have contributed to this considerable surge.

“It’s fantastic that Mather Jamie’s continuing success has also been recognised, particularly as the firm is celebrating its 25th anniversary this year.”

Major deals secured by Alex Reid in the last 12 months have included the sale of Loughborough’s largest warehouse – the former Morris Cranes site on North Road – to Charles Bentley & Son and the letting of listed building Chapel House to lift firm Axess 4 All.

Mather Jamie also has three new developer-led business park opportunities coming forward across the county which will bring forward the opportunity of circa 800,000ft² of new-build industrial and office accommodation.

For details of these and other land opportunities in Leicestershire, and elsewehere in the East Midlands, please contact Alex Reid on 01509 233433.

Established in 1991 and based in the East Midlands, Mather Jamie Chartered Surveyors is an independent mixed commercial and agricultural practice with a long established and unrivalled reputation for delivering reliable advice and expertise on residential and commercial developments. For more information please telephone 01509 233433 or visit www.matherjamie.co.uk.

Featured News
Thoroton Farmyard site sells to Wheatcroft Land for development
William Davis Homes Acquire 17 Acre Site in Sutton Bonington
Breedon Group Expand Office Portfolio
New tenants at Normanton farm lay the groundwork for going organic
State of the art office complex comes onto the market in Cossington Leicester
HQ offices at the heart of the midlands become available to let in Ashby
We Are Recruiting a Commercial Management Surveyor
Sign up to receive Property Alerts
Do you want to be the first to hear about our new properties?