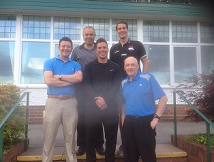 The firm teamed up with Leicester Riders Head Coach, Rob Paternostro and Leicester Riders Guard, Tyler Bernadini, along with several staff, clients and professional colleagues, to raise funds for the Foundation, which does work in schools and the local community.

The players were lucky with the weather and the sun shone throughout the friendly, informal competition. The team competition was won by the team with Director Martin Ward at the helm, who, despite some wayward golf still managed to trounce the other teams by 20 shots.

The team led by Director Robert Cole probably had the most fun but also posted the worst score, coming in 38 shots behind the leaders.

The Mather Jamie team would like to thank all of those who attended to make such a wonderful day and so generously donated to such a worthwhile cause.

Featured News
Thoroton Farmyard site sells to Wheatcroft Land for development
William Davis Homes Acquire 17 Acre Site in Sutton Bonington
New tenants at Normanton farm lay the groundwork for going organic
State of the art office complex comes onto the market in Cossington Leicester
HQ offices at the heart of the midlands become available to let in Ashby
We Are Recruiting a Commercial Management Surveyor
Sign up to receive Property Alerts
Do you want to be the first to hear about our new properties?