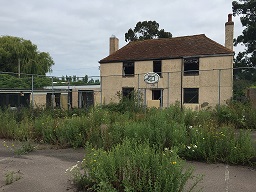 Bodkin Farmhouse, on Thanet Way, has been removed from the National Heritage List for England following a lengthy process by land agents Mather Jamie on behalf of the property’s owner, working with Historic England. This resulted in the Department for Digital, Culture, Media and Sport (DCMS) taking the rare step of removing the property from The List.

The property, which was originally built in the 18th century, ceased operating as a farmhouse in the 1970s and was spot-listed at the time. Since then it has become an eyesore due to vandalism and disrepair. The property was judged by the DCMS to have lost its claim to special architectural and historic interest following attempts at modernisation by various previous owners. Having been removed from The List, it is now due to be demolished.

Elizabeth Lewin, Rural Practice Surveyor for Mather Jamie, said, “This has been a long and complex journey, as removing a property from the Heritage List is a process which is not usually undertaken, for the obvious reason that properties on The List should be protected. “However, the whole point of The List is that it should reflect properties with architectural and historic merit, and we successfully argued on behalf of our client that this could sadly no longer be said of Bodkin Farmhouse.”

Historic England and Mather Jamie worked closely with Canterbury City Council, and with Georgian and Victorian Societies, to ensure that the proper local authorities and experts were consulted with and notified throughout the process.

For details of similar rural land opportunities, please contact Elizabeth Lewin on 01509 233433 or refer to the Mather Jamie website - www.matherjamie.co.uk

Featured News
Thoroton Farmyard site sells to Wheatcroft Land for development
William Davis Homes Acquire 17 Acre Site in Sutton Bonington
Breedon Group Expand Office Portfolio
Mather Jamie closes land sale for housing development in Kirk Langley, Derbyshire
New tenants at Normanton farm lay the groundwork for going organic
State of the art office complex comes onto the market in Cossington Leicester
HQ offices at the heart of the midlands become available to let in Ashby
Sign up to receive Property Alerts
Do you want to be the first to hear about our new properties?